Hydrogen-Powered Robot Jellyfish Does Not Need Batteries Or Electricity

Meet RoboJelly… the most amazing robot invented yet. What makes it so astounding? Well this underwater robot is only fueled by hydrogen, so in theory it should work perpetually, never running out of energy, as long as it stays in the water.
This amazing creation is made out of very special materials called shape-memory alloys and the scientists who developed it say it could be very useful as an underwater surveillance spy or better yet, it would be extremely handy for search and rescue operations. Sounds interesting? Let’s find out more.

So first of all how does it work?

The amazing robot is based on a jellyfish named Aurelia aurita, also known as the moon jellyfish. Robojelly is designed and manufactured out of a special material called shape- memory alloy, and before you start googling what shape-memory alloys are, let us explain. 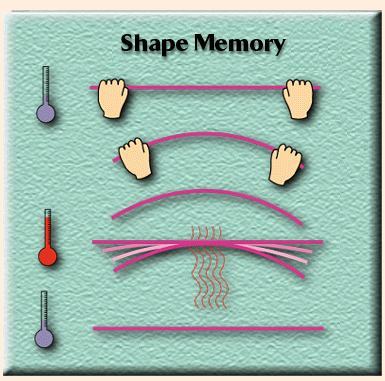 Shape-memory alloys are also known as smart metals and they’re a special type of alloy which remember their original shape, hence, in case they’re altered, they can simply return to the pre-deformed shape by applying heat. Pretty neat huh? The newly invented robot mimics a jellyfish’s real life movements with the aid of its eight moving segments, which are wrapped in platinum-coated carbon nanotubes.

Here’s the blueprint of how the robot was built. The final project is real life-like

As we all know, water is made out of oxygen and hydrogen, and when the two elements react with platinum powder on the coat of the tubes which will produce heat.

Now, since we know heat makes the alloy change shape when heat is applied, you can now understand how this astonishing robot moves exactly like a jelly fish by a propulsion motion. This robot manages to replicate the graceful flexing of a real life jellyfish, hence, if it were actually in the water, you’d have a hard time telling it apart from other invertebrates. 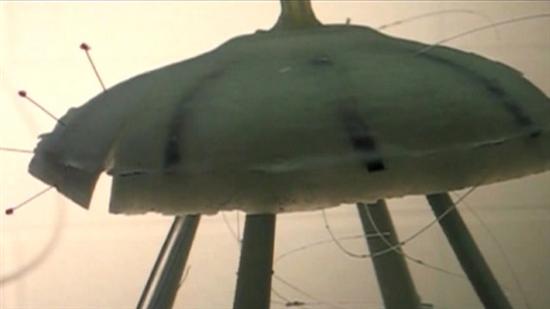 It may look like a UFO from this angle, but it’s just the Robojelly

Now, here’s a little bit of juicy information you might like to know, this project is supported by the US Navy, so you know what this means… enemy subs beware! There’s a new spy in town and it’s shaped as an innocent jellyfish. The robotic jellyfish also moves with the aid of circular muscles placed in the inside of its dome, umbrella-shaped part of its body.

The artificial muscles contract just as a normal one would, causing the dome to close in on itself and eject water that propels the jellyfish forward. All this robot needs to work is the water around it, saving us a lot of energy, money and also, having a great impact on nature. Hopefully, scientists will focus more on developing alternative energy sources which will help us protect the environment and stop all sorts of feds over oil reserves.

Is this the real deal jellyfish, or the robot? It’s the life-like Robojelly!

Robojelly is perfectly capable to harvest its power directly from the water, without having to rely on any external fuel source or energy storage. Yonas Tadesse, the study’s lead author from Virginia Tech declared to the Institute of Physics that:

“To our knowledge, this is the first successful powering of an underwater robot using external hydrogen as a fuel source”

Unfortunately, the scientists from Virginia Tech and the University of Texas at Dallas need to work even more to make the hydrogen-powered robot fully functional, but you can watch the video below and see the electrical prototype of this amazing robot. What do you think?

So, if there’s a hydrogen powered jellyfish, why couldn’t we use hydrogen as car fuel?

Well, prepare to be amazed by the fuel cell vehicles (FCV) of the future… FCVs are also powered by hydrogen gas rather than gasoline hence emitting no harmful gas emissions, protecting the environment.

How are they different from normal cars?

FCVs may appear similar to conventional vehicles on the outside, but on the inside the technologically is highly advanced. The major difference is the fuel cell stack which is able to convert hydrogen gas stored on the inside in combination with oxygen from the air, hence producing the necessary electricity to start the electric motor and move the vehicle.

Have a look below to see how FCVs are going to look like: 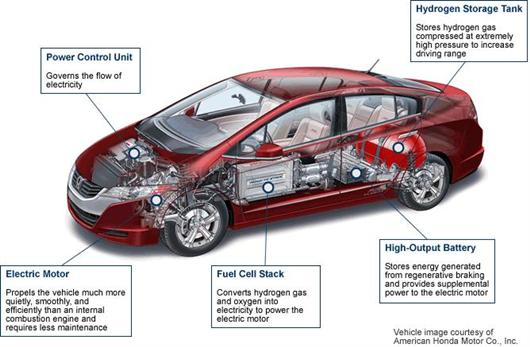 These are the major components of an FCV

So how close are we to driving a car fueled by hydrogen?

Honda has already introduced its FCX model, a car utilizing a fuel cell instead of conventional fuels. A fuel cell turns hydrogen into electricity which drives the wheels through electric motors. Have a look at it below:

And here’s how the system works