Giant cat-size rats roam the lands of South Africa, if the fact that their size is bigger than a normal house-hold cat isn’t so scary, maybe the fact that they are responsible for the two separate deaths of infants. These monsters are almost one meter long and their front teeth are two and a half centimeters (one inch) long. The giant rats which caused the deaths belong to the African Giant Pouched Rats species and are known to have an omnivorous diet, they eat both vegetables and other small animals, or, as in this unfortunate case, they also eat defenseless humans. Take a look at a video of how these giant monster rats look and try not to be fooled by there somewhat cute appearance…

Lunathi Dwadwa age 3 was devoured by a giant monstrous rat as she slept quietly in her bed, so was another child from Johannesburg… both children were mutilated, their eyes had been gouged out.

Authorities are now on the look out and families are alert… these giant monsters are indeed frightful. 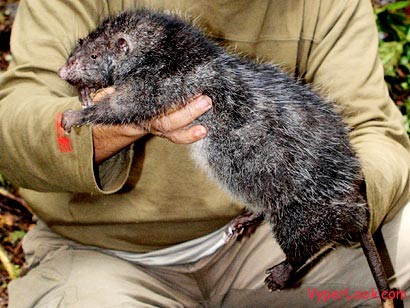 The video below shows a species of giant rats… just take a look.