A lot of Criss Angel’s tricks have been revelead. Now it’s time for this one 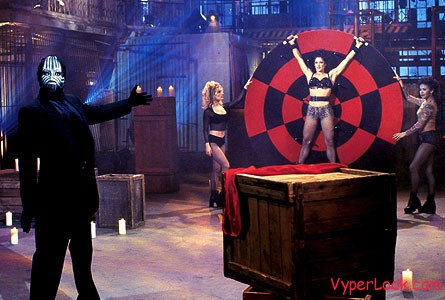 So here is the video

Angel was born on December 19, 1967, raised in East Meadow, New York and is of Greek descent. Angel grew up loving music (playing drums, flute and accordion) and has always had an interest in magic.

Criss Angel first became interested in magic at the age 7, when his Aunt Stella showed him a card trick. Two of his biggest magic influences are Harry Houdini and Aldo Richiardi. As a teenager, Angel performed at birthday parties, at night clubs, at home to entertain his family, and at private events. Early in his magic career, magician James Randi designed Angel’s professional business card.

Criss then scored a show on Broadway titled “Criss Angel Mindfreak,” which ran up until January 6, 2003 following a run of 600 performances at The World in The World Underground Theater in Times Square. He also starred in several television specials.

Criss Angel won the Academy of Magical Arts’ Magician of the Year award in 2005 and the IMS Magician of the year in 2001 and 2004. Angel discusses magic and his life in Mindfreak: Secret Revelations (published April 24, 2007), which became a Los Angeles Times best seller.

Criss Angel is the star and creator of the A&E Network show Criss Angel Mindfreak. Seasons 1 and 2 were filmed at the The Aladdin in Las Vegas, with Season 3 at the Luxor Hotel. Premiering on July 20, 2005, the illusions have included walking on water, levitating above the Luxor Hotel, floating between two buildings (although this could be interpreted by some as a studio created blue screen trick and not an on site illusion), causing a Lamborghini to disappear, surviving in an exploding C4 Crate, and cutting himself in half in full view of an audience.

Injury On a stunt in the third season, he attempted to jump out of a van before it crashed and exploded. Criss made it but landed on his neck and the show’s production was stopped for two weeks while he recovered.

Angel was the featured guest star on CSI: NY on February 28, 2007 in an episode titled “Sleight Out of Hand” as a character named Luke Blade, a famous magician whose assistants die in unusual ways that are strangely related to the illusions he performs in the episode. In the episode, he performed three illusions (being sawed in half, being set on fire, and a version of his “Submerged” illusion).