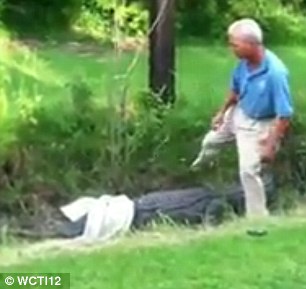 The recent attack in North Carolina reminds us just how dangerous alligators are! The 300 pound gator was 10 feet long and he wasn’t very happy when an aquarium biologist tried to catch and move him from the side of a highway close to the Tar Heel State’s barrier islands. 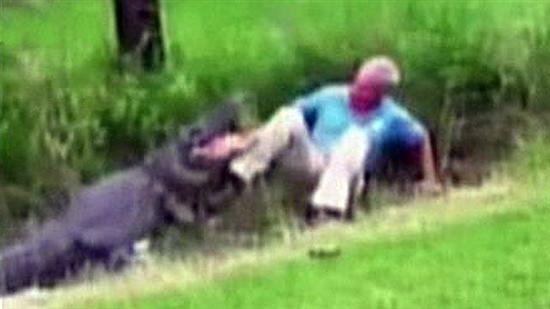 The extremely scary moment was caught on video and we can see how the biologist comes from behind trying to grab the alligator with his bare hands. The only so called “safety” precaution taken was a white cloth, or towel which was dropped on the gator’s head. As you will see in the video, the alligator wasn’t very thrilled of the encounter and lashed out, and attacked the man, grabbing him by the arm and pulling him in a nearby ditch.

Luckily, the biologist didn’t lose his temper and instead of laying there, he fought back, kicking the alligator which eventually let go. The wild reptile was eventually caught up and released back into the wild. Watch the video below, and consider yourself warned, don’t go near alligators… they’re wild and dangerous!

Below, you can watch another video of a gator attacking a human, but this time, it’s in a controlled environment. The man is a croc and gator “trainor” and he’s doing an entertainment show with these reptiles. On one show, the gator gets tired of all the show, and decides to show the trainer who’s boss by grabbing his arm. In this case also, the man makes it out alive, but it’s proof that alligators should not be used as entertainment.

And here’s a man feeding wild huge alligators! It’s amazing that he makes it out alive!

The video below shows us a how an alligator feeding demonstration goes terribly wrong! The wild animal turns and fights back and instead of the food, he jumps for the feeder’s hand. Apparently, Jonny Cobbler, the feeder, made a mistake which almost cost him his life.

And below is another example that crocodiles are just not suitable animals for entertainment. They are unpredictable, and even though they’ve gone through the same routine, over and over again, if someone gets on their nerves, they strike back! Like in the video below, where a so called alligator trainer gets attacked by the wild beast and his hand hangs by only a few ties:

And since we’ve seen some videos about the people who get attacked while feeding an alligator… let’s see what happens when the feeder uses a different approach for extra entertainment. In the video below, the zoo-keeper feeds the croc while it’s in the water, from above… but he didn’t count on the fact that he croc will jump out of the water and pull him inside the water.

Bungee jumping is safe, right? Well, normally, if you take all precautions, it should be, but if you jump over a river and stumble upon a crocodile… well, let’s just say it’s not a pretty sight. Watch the video below.

Do not play with fire and do not put your head in an alligator’s mouth no matter how tamed you think it is… It will turn around and bite you, like in the video below:

We do not know how to make it more clearer to you: do not do anything to cross a croc, or better yet, just stay away from them, the man in the video below kept playing with the crocodile and he got his fingers bit off: