The Most Amazing Extreme Motorcycle Riders You’ve Ever Seen 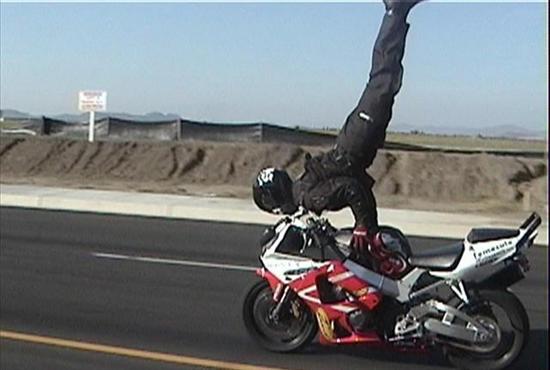 Adrenalin rush? These crazy guys know the feeling! Some people just don’t know where to draw the line when it comes to riding their motorcycles, and end up doing crazy things (like standing up and texting ) just to impress other people.
What’s even worse, is the fact that they do it in day-to-day traffic which endangers not only their life, but also the life of innocent by-standers. Here’s a collection of the most extreme motorbike riding, needles to say, do not try this at home.

Tweeting On A Speeding Motorcycle:

This guy is updating his Facebook and Twitter statuses while his standing on a speeding motorbike. What’s even more outrageous is the fact that his friends, also on their bikes, are filming the entire thing regardless of the potential life threatening situation. All of the motorcycle riders in this video are going with amazing speeds, over 100 miles/hour.

And below you can watch a series of crazy daredevil motorbike riders speeding and doing stunts in traffic:

In this video, you can see how some really experimented riders do all sorts of amazing stunts, such as standing on their bikes while speeding on the highway. As good as they may be, how can they be sure that they’re gonna get out alive from a ride like this one?

They ride the motorcycle sideways, backwards, on one wheel, and many more ways, all that on a vehicle that’s going at high speeds… Perhaps, the most unconscious one of all is the person filming all of the stunts. Have a look:

Now that we’ve seen what professionals can do, have a look at the video below. A guy invented a new way to ride a bike: one one wheel… but that’s not all, this daredevil gets off his motorcycle by doing a back flip!

Two other crazy riders in the clip drive their bikes on the arches of a bridge… what were they thinking? And they’re really speeding too. I guess there’s a thin line between sanity and insanity.

And now that we’ve seen these amazing stunts which went smoothly, let’s see what happens when motorcycle stunts don’t go well, and the courageous drivers have the misfortune of falling off their speeding bikes. The videos below are not for the faint of heart.