The Fastest Train in The World-Maglev Train Shanghai (Video) 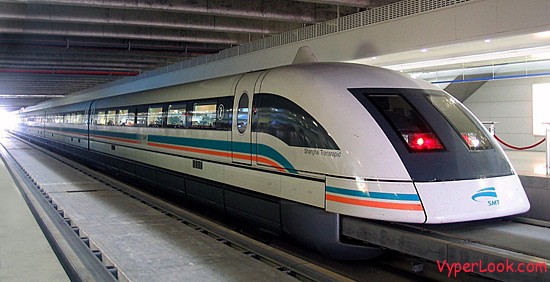 The Shanghai Maglev Train or Shanghai Transrapid is a magnetic levitation train (maglev) line that operates in Shanghai, China. It is notable for being the first commercial high-speed maglev line in the world

Maglev, or magnetic levitation, is a system of transportation that suspends, guides and propels vehicles, predominantly trains, using magnetic levitation from a very large number of magnets for lift and propulsion. This method has the potential to be faster, quieter and smoother than wheeled mass transit systems.

The power needed for levitation is usually not a particularly large percentage of the overall consumption; most of the power used is needed to overcome air drag, as with any other high speed train.