Where Space Aliens Come From?

That’s a good questions,if you belive in aliens. 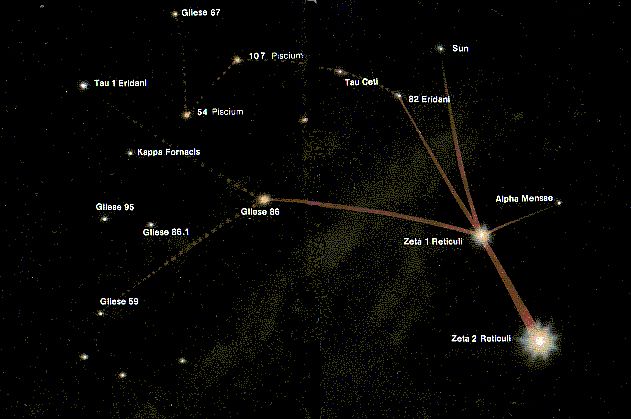 Even if you know nothing else about the UFO phenomenon, you certainly have heard about what supposedly happened in Roswell, New Mexico in July, 1947: a crashed flying saucer, autopsies on alien bodies, Government cover-ups. It ushered in the 1950s kitsch of bubble-headed little green space jockeys inside silvery saucers flitting across our skies.

This space-age mythology, embellished over the years, tells of an alien interstellar vehicle simply falling out of the sky near a desert town.  The only tangible evidence is scraps of wood and metal foil and other mundane debris that suspiciously look like they came from a crashed U.S. military balloon. That is, unless you believe the Government has been hiding all the goodies — including alien corpses — inside an Indiana Jones style warehouse all these decades

Apparently 12 humans were sent to the home planet, named Serpio, in the Zeta Reticuli system.  The write-up describes a “10-month journey” with poor food (what do you expect from an interstellar airliner?)

The reality is that the Zeta Reticuli system is a fascinating place where I’d expect to find advanced life.  The two stars are similar to our sun and separated by 800 billion miles. This would leave plenty of elbowroom for inhabited planets to exist around both stars.

The stars are estimated to be as much as 3 billion years older than our Sun.  Any intelligent life that originated there would be far too advanced for the shenanigans reported in Roswell. What’s more, you could not place a sentient entity a billion years more evolved than us onto a dissection table. And, it definitely would not be humanoid, or perhaps even biological.

Similarly, a native technological intelligent species certainly would be enticed to explore any inhabited planets orbiting the companion star in the Zeta Reticuli system. They would rapidly become an “extra-terrestrial” space-faring civilization. They would be motivated to develop far-advanced propulsion systems needed to hop over to the companion star.  Such a trip would take close to 2,000 years with our present generation space vehicles.

In this star system UFOs could become reality. That’s because a less-advanced civilization on the companion star might be able to see manifestations of a visiting advanced intelligence from the neighboring binary companion.  Eventually they could decide to send a living emissary for a face-to-face contact between civilizations, assuming a similar astrobiology. It could be a scene straight out of the sci-fi classic film “Avatar.”

To date, no planets have been found around either star. NASA’s Spitzer Space Telescope did find the telltale glow of a dusty disk that would indicate planets are present.

As our survey techniques improve it’s probably only a matter of time before we discover a family of worlds in the Zeta Reticuli system. And, follow-up observations will seek out the biosignatures of life on any planets in habitable zones. This is a far more enthralling future narrative than the unimaginative fantasy of some space hot rodders totaling their vehicle in the middle of nowhere.

Now, Roswell UFO believers can save us a lot of time and effort by simply telling us exactly what the planetary system looks like . . .