Giant rat Killed With A Pitchfork In New York 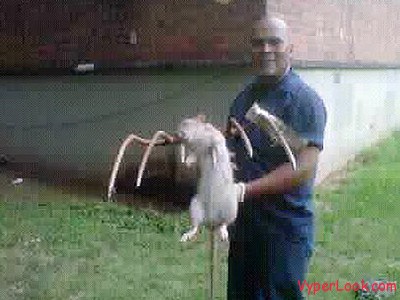 Urban myths anyone? How would you like to hear about one that just came true? A giant “mutant” rat emerged from the sewers and started roaming the hall ways of a New York housing project. Now of course, that’s a slight exaggeration, but the rat really was a giant. It was three feet long (one meter) and unfortunately for the rat, it had a third degree encounter with a pitchfork, and needless to say that the pitchfork won. Jose Rivera, the worker who killed the beast reported that he was filling out a rat hole when three such animals came out running. He was only able to kill one of them, after striking it twice.

The animal had white fur and a yucky long tail, just like normal rats except, three times bigger. Animal experts have said that the animal is supposedly a Gambian pouched rat, a species outlawed in the United States after the 2003’s monkeypox outbreak, which killed 100 people.