Juan Baptista dos Santos was born in Portugal around 1843 in the town of Faro and was examined for the first time when he was only six months old. He is best known as the man with two full functioning penises and an extra pair of legs behind and between his own and that were united along their length.
His career as an exhibitionist seems to have been confined strictly to medical circles; in 1865 turned down a sum of 200,000 francs to appear for two years with a French circus. He was shown before the Royal Medical and Chirurgical Society and Saint Mary’s Hospital in London and examined by numerous doctors in England  and France.

The prevailing opinion, at least in dos Santos’ early years, was that his third leg should be amputated. Dr. William Acton of the Royal Society feared that the limb’s “low vitality” would ultimately doom him, and expressed grave concerns about the leg’s lack of circulation.

Dos Santos’ third leg, which was attached to his lower spine by only a small band of tissue, was a composite of two legs, having eight toes, two heels, and two tibiae and femora. He had neither sensation nor active movement in the extra leg. The knee was completely ankylosed and immobile; dos Santos claimed this was due to a Portuguese doctor having broken and reset it when dos Santos was a year old, in order to make the leg less obtrusive. The leg could be concealed easily by strapping it tightly to his right thigh. Thus, dos Santos was not at all encumbered by the dangling appendage, and he walked, ran, and rode horses with ease.

It was not dos Santos’ three legs that most excited medical men, but his double genitalia. He possessed two functioning penes and three scrota, the outer two of which each contained a single testis. Dos Santos claimed that the central scrotum had also contained a pair of fully-formed testes, but that these had retreated into his abdomen when he was ten years old. Wrote the photographer C.D. Fredericks, creator of the only known photograph of dos Santos, in 1865, “…the sight of a female is sufficient to excite his amorous propensities. 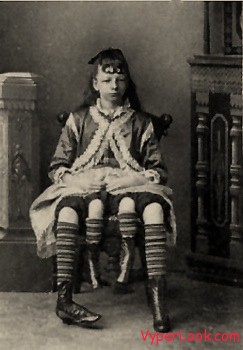