Live Alligator Is Eaten By A Python Snake 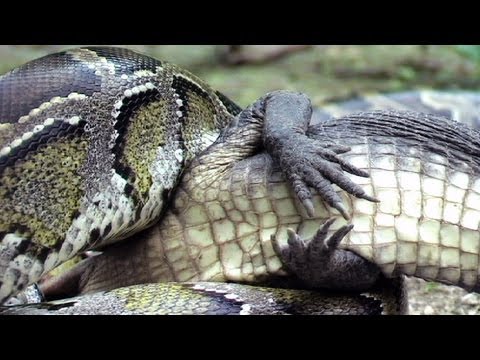 Watch a python snake as he eats a huge live alligator! Two of nature’s most fierce predators came face to face and it’s pretty obvious that one of them had to win the face-off. In this shocking cases, we will see snakes devouring alligators or crocodiles in a matter of minutes… Let’s check out some amazing stories of snakes versus crocs and alligators.

It truly is a jungle out there, and only the fittest survive. In these amazing and shocking cases, two very feared members of the animal kingdom fight for supremacy, in the videos you are about to see, the snakes eat the alligators or crocodiles alive… and there’s no doubt about it, it’s a gruesome sight to see…

The video below is the most recent case caught on tape. You will see a time-lapse of a huge python eating an even larger alligator, how that is possible you ask yourself? Have a look for yourself and see. It is known that pythons are constrictors, meaning that they wrap themselves around their pray and smother them to death before gulping it up, but in the video below, the snake eats the alligator alive as is lives and breaths, until there is nothing left of the “poor” croc.

And if you were shocked to see the video above, have a look below… this time you will see an anaconda eating a crocodile during the night time. By the looks of things, the croc may have been injured or killed before the video was taken, but one thing’s for sure, an anaconda does not eat anything it didn’t kill ion its own, so, even if the video shows us a motionless crocodile, he was most certainly taken down by the snake.

Now in the video below you will see a huge alligator taking on a Burmese python, much smaller in size. Immediately after reading this, you will think to yourself that the snake didn’t stand a chance… well surprise, surprise… after hours of an ongoing excruciating battle, the python manages to make his way out of the alligator’s mouth. But wait, there’s more, not only did the snake make it out alive from a sticky situation, he also turned around and intimidated the other reptile into running away. See for yourself below:

Now in the video below, the croc is not so lucky to make it out alive… here is another clip where an alligator is killed and eaten by a snake:

You may remember the famous case of a python that exploded after eating an alligator, right? You can see a picture of that event below: 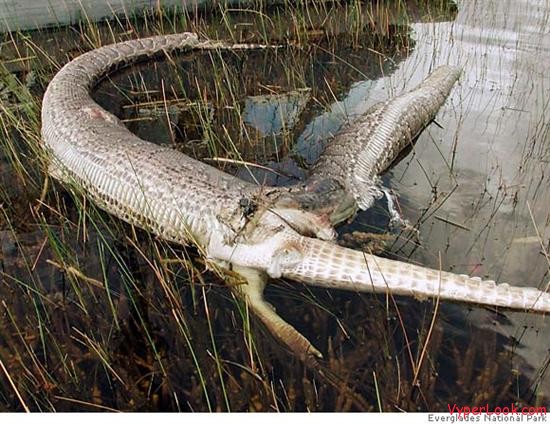 Well, you may ask yourself how that is even possible… a team of experts say that there are more than one possibilities: either the snake swell up due to the excessive heat outside, and it simply burst due to it’s prey’s enormous size, or it is also possible that the alligator moved around inside the snake and scratched the snake from the inside, causing it to explode. Whatever really happened, one thing is for sure… The python may have won the first battle, but the alligator got the last laugh, even if he had already arrived in alligator heaven. See more explanations in the video below:

Below you have another shocking example of a snake eating a crocodile… sure, the croc is kinda small, but the strength of the snake must have been enormous to take him out like that.

And here’s another battle that ends badly for the alligator. You will see an Anaconda attacking, killing and eating an alligator. Again, the ace in the snake’s sleeve is that fact that he’s a constrictor, and he wraps himself around the alligator leaving it motionless. See for yourself:

And below you can also see some pictures of the gruesome battle: 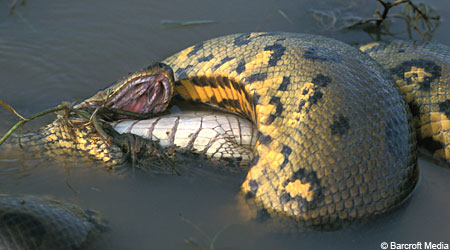 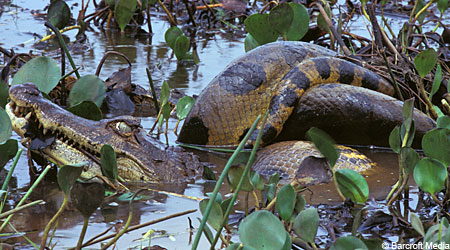 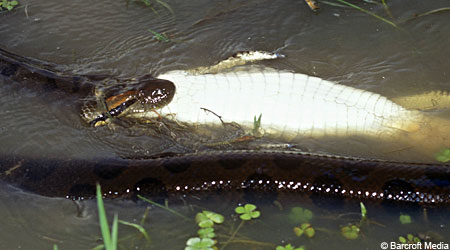 But there’s the opposite to every coin so see a video below where a crocodile eats an anaconda. Payback must really hurt… It’s a jungle out there, so… survival of the fittest…